Over the past week the station has been dedicated to an S-band scan looking for new targets and refreshing the frequency list, triggered by the recent launch of the mysterious ZUMA mission.  This tends to be a semi-annual activity as it can eat up a lot of observing resources even with much of the data gathering automated the data reviewing is tedious.

Upon reviewing the data from January 20, 2018, I noticed a curve consistent with an satellite in High Earth Orbit (HEO) on 2275.905MHz, darn not ZUMA… This is not uncommon during these searches.  So I set to work to identify the source.

UPDATE: Following official confirmation from NASA that the object discussed in this blog is actually IMAGE on January 30, 2018, the blog will no longer be updated.  See new blog posts for any updates on the IMAGE story.

Discovery plot above obtained of IMAGE and the first fit attempt that lead to revealing it’s identity.

Engineers at GSFC have acquired the suspect S-band source using the 4m CTA (Compatibility Test Antenna) here at GSFC (.jpg attached and no I’m not in the picture). They acquired the signal while the target was on ascent at about 2RE. Center frequency (CF) was between 2272.478 and 2273.418. The difference between IMAGE documented CF of 2272.5Mhz can be attributed to expected Doppler. Subcarriers are visible as well 1.7Mhz from CF as expected. The signal strength was oscillating. Plots will be forthcoming. The oscillation is not unexpected given IMAGE’s loss of spin balance.

All indications so far suggest that this is, in fact, IMAGE.

IMAGE Calling Home, is Anyone Listening?

I didn’t think of it much more and went about my data review looking for any evidence of ZUMA.  But as I reviewed another chunk of spectrum a bit lower in frequency I was greeted by a much stronger carrier and what appeared to be data side bands. 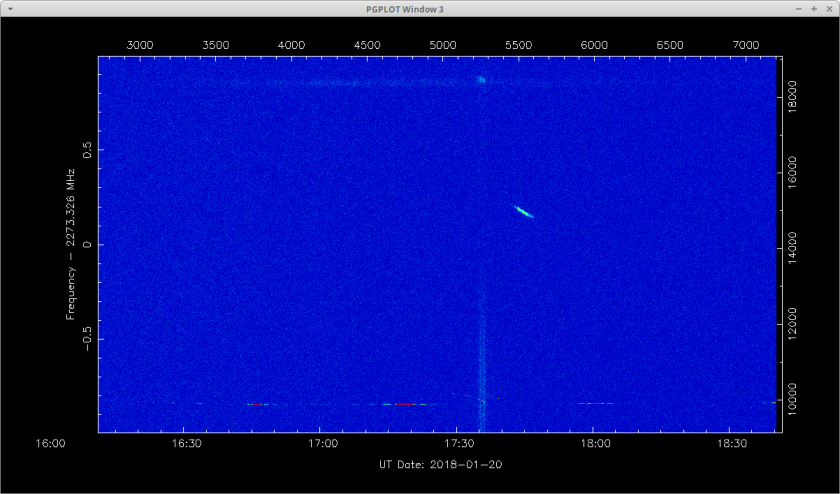 The above images shows the data (+ 1.7MHz) at the top of the plot and the carrier centered on 2270.505MHz at the lower end of the plot, there was also a data side band at -1.7MHz, not shown for clarity.  With a properly equipped ground station, telemetry would certainly be possible to copy.

CLARIFICATION, January 25, 2018 – To help clarify the data side band observations please examine the image below as the classified STSS Demo 2, [2009-052B, 35938], mission in low earth orbit (LEO) also has a data side band on or about IMAGE’s.  Note the long duration of the IMAGE data side band corresponding to maximum elevation and closest approach to my ground station vs. the relatively brief one from STSS Demo 2. This can also be seen in the plot above but just is not that clear and no identification of the signals was presented.

So what was IMAGE?  I did a little Googling and discovered that it had been ‘Lost in Space’ since December 18, 2005 after just dropping off the grid suddenly.  The mission was designed to image the magnetosphere, more details about that can be found in the press kit.

NASA considered the spacecraft a total loss due to a design flaw that manifested while the spacecraft was in its extended mission.  The NASA failure review did however conclude that it was possible for the spacecraft to be revived by permitting a ‘Transponder SSPC reset’ after it passed through eclipse in 2007.  One must assume that didn’t occur in 2007 and they gave up.

So with an undead satellite to monitor, I took up the task of collecting more data about it and let the system carry on without me in the search for ZUMA for a few hours.  Based on information in the NASA failure report and eoPortal the nominal spin rate of the spacecraft was noted as around 0.5 rpm that’s a period of about 120 seconds. By monitoring with my real-time receiver (see below) I was able to notice both a subtle period in the signal amplitude and frequency that appeared to be coincident. After extracting some of the data from the strf plots, I was able to produce a curve that allowed for the extraction of the present period of the spacecraft as noted in the graph below it is presently about 175 seconds or 0.34 rpm.

As the day progressed the Doppler data made it crystal clear this was the lost IMAGE mission.

A fit without performing any fit functions and the curve clearly follows the behaviour of IMAGE’s TLE as provided by SpaceTrack.

Below is the tracking plot from my ground station for the pass this data was collected from.  As you can see around 17:17UTC on January 20, 2018 it passed right overhead of me creating an impressive signal in my omnidirection search antenna. 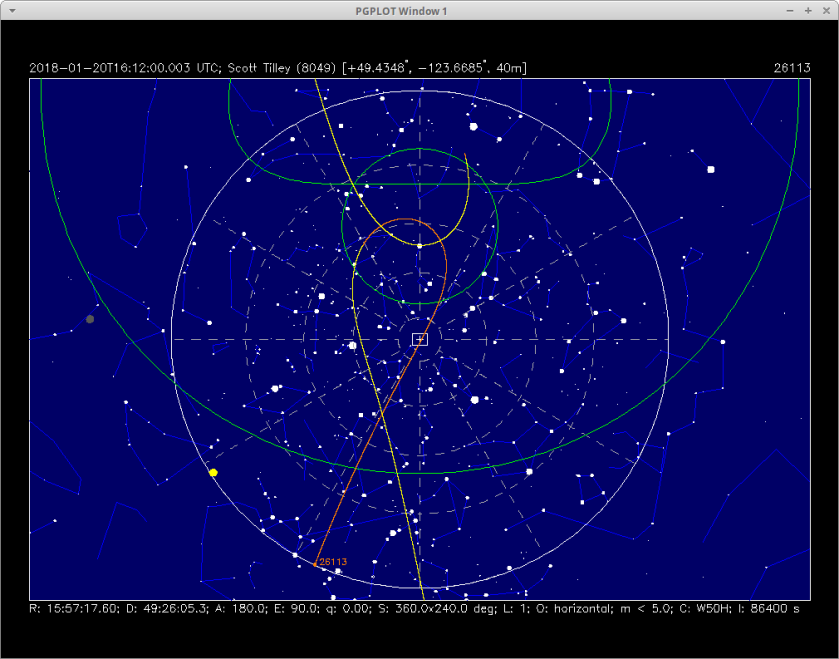 IMAGE Basking in the Sun

IMAGE was placed into an interesting HEO with a 90 degree inclination.  Periodically the spacecraft will enter an eclipse and NASA surmised that this may trigger it to restart and apply power back to the communications system.  That appears to have happened!  As you will note from the plots below the Sun angles are presently good for IMAGE and it may just stay operational for some time to come. 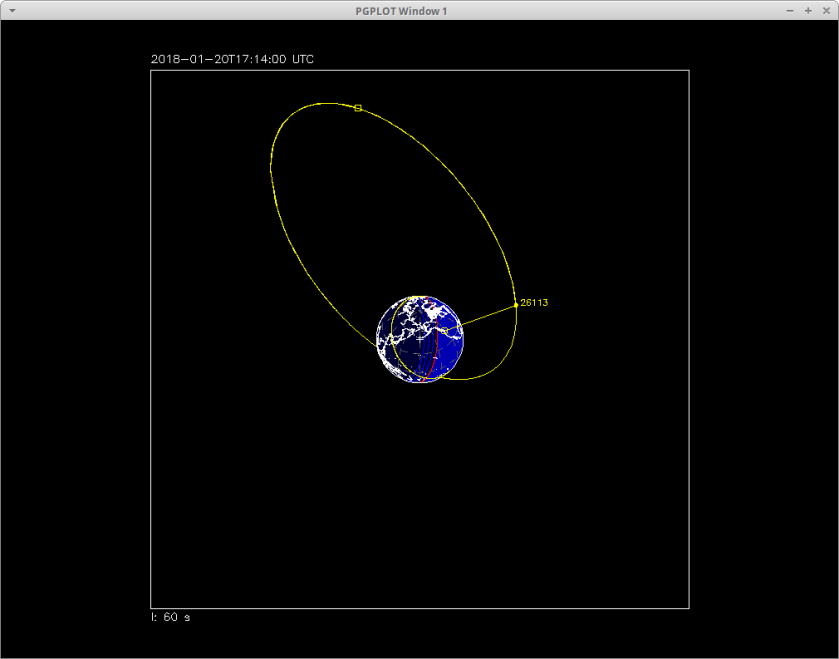 Like ISEE3 is it possible for IMAGE to be rebooted and controlled again?  Maybe, as it seems that the main reasons for it not calling home before have resolved themselves at least temporarily.

A few major questions remain about the health of the spacecraft:

At the very least it made for an interesting Saturday afternoon in the radio room.

After creating this blog and posting it I noted it only seemed to draw the attention of a few of my fellow satellite tracking enthusiasts.

I soon realized a couple of tweets was not going to draw the attention of the people that could do something to see if IMAGE could be recovered.  So I did some further research and found the contact information for the IMAGE principal investor, Dr. James L. Burch, Director at the Southwest Research Institute.

Below is a chronological presentation of all correspondence between myself and NASA and others with primary information.

06:38 UTC – I reach out to Dr James L. Burch the IMAGE principal investigator with news of my observations.

09:41 UTC – Dr. Burch responds and advises he is ‘very excited’ and will get back to me with updates.

12:39 UTC – Richard J. Burley, former IMAGE Ground System Manager and Mission Director contacts me after being alerted by Dr. Burch and indicates JSPoC and DSN have been alerted. He also confirms my understanding of the possible failure mode IMAGE experienced.

00:13 UTC – Mr. Burley responds to a post I made on Seesat-L and copied to him to the amateur satellite tracking community to turn their gaze on IMAGE to help collect any information we can to support recovery efforts. He has no schedule updates as the team is getting organized to respond and provides a wonderful account of IMAGE’s past successes:

“Thank you for all of your efforts for IMAGE. IMAGE made ~39 new discoveries about the Earth’s magnetosphere and plasma-sphere. At the time it stopped radiating, NASA HQ ranked IMAGE as the 2nd most valuable space-physics mission flying. A follow-on mission called MMS, with a 4-spacecraft constellation is currently flying, in part, to follow up on these discoveries.

16:55 UTC – Mr. Burley reports that engineers at Goddard Space Flight Center (GSFC) have detected a signal consistent with IMAGE, below is the team of GSFC engineers huddled around their gear acknowledging the moment with a photo. 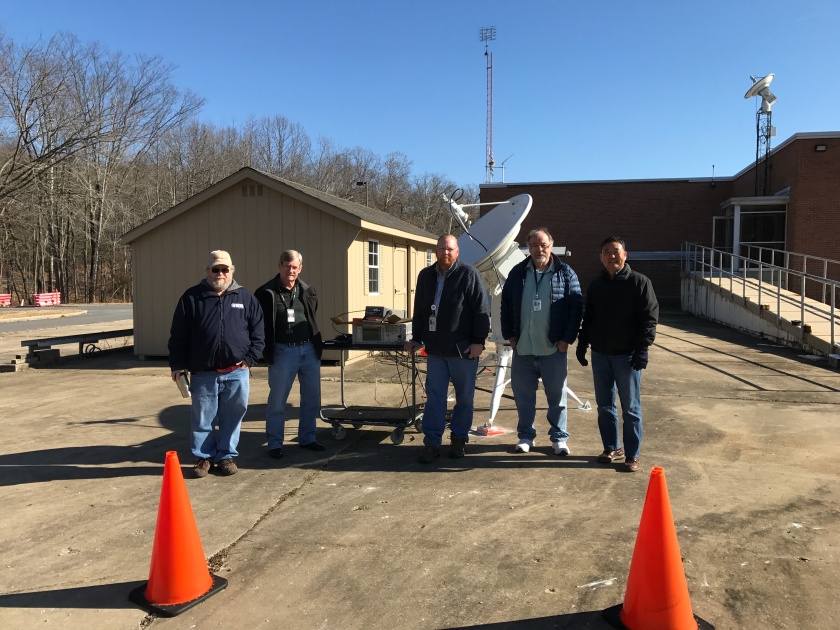 18:37 UTC – Mr. Burley and I discuss that I have begun a review of my data archive.  I share this detail with Dr. Cees Bassa who also has data archives. NASA has no way of knowing when IMAGE’s transmitter became active again.  He provides technical information on IMAGE’s behaviour upon reboot:

“When the Spacecraft Control Unit (SCU) reboots, the s/c clock gets reset to zero.  The command watchdog timer is 72 hours.  So, if it doesn’t get a command within 72 hours it will reboot again, and reset the clock back to zero again.” 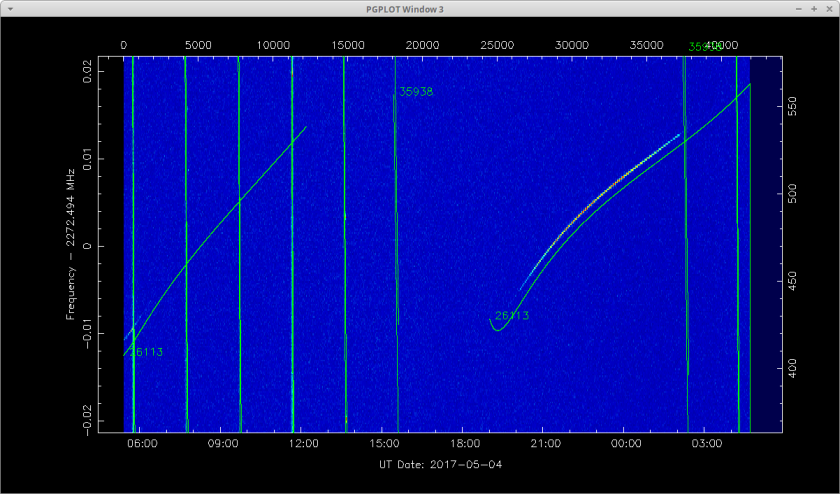 20:06 UTC – Dr. Cees Bassa a fellow satellite tracking enthusiast completes review of his data archive which shows IMAGE signal as early as October 2016 and no detection in January/February 2014:

NASA officially confirmed IMAGE is the object discussed in this blog.

NASA was waiting to base final confirmation on reception of telemetry.  Once able to obtain frame lock they decoded the spacecraft ID, 166, which is IMAGE’s.

Only one way communication was accomplished with the capture of data frames so that analysis of the health of the spacecraft bus can be performed allowing next steps to be planned.

NASA has a lot of hard work ahead of them.  They need to get a temporary tracking and control terminal up to carry on with determining the status of IMAGE.  Based on the health of  IMAGE they will need to recreate a mission control center from 13 years ago, obtain staff and procure funds to carry on with a post recovery extended mission…

One thing is for sure, no one ever planned backward compatibility for a mission believed to be dead.  Perhaps this is the beginning of a new way of thinking about archiving mission hardware and software when failures seem to have a probability of being recovered in the distant future. Humanity’s future in space will require us to think about compatibility with hardware that we let slip away for long periods of time and somehow finds its way home and also listening for that hardware so we know when wayward missions come back to us.

One major win was NASA’s foresight to publish a very detailed and honest failure review.  In my opinion, it saved IMAGE.  NASA left a guide to prepare a mind to see IMAGE again.

“In the field of observation, chance favors the prepared mind.” Pasteur.

I would like to thank the NASA team that worked to identify IMAGE and confirm my observations, the IMAGE team for their overwhelming outpouring of support and joy at the news of the recovery, Dr. James Burch and Richard Burley for believing that an amateur could contribute to their wonderful work and return their lost friend to them.