LES-5 was recovered on March 24, 2020.  Since then I have completed a fair amount of research on the spacecraft and collected a number of published papers on the results of the experimental mission.  From those papers, I will lay out some possible methods to analyse the decoded telemetry from LES-5 such that we may be able to determine if the command receiver is still active.

The sampling interval of the telemetry beacon is 10.24 seconds.  Therefore, at 100 bps that provides 1024 bits of telemetry or 128 bytes.

I have so far be unable to find a paper documenting the telemetry format of the LES-5 satellite.  In order to understand some of the telemetry we will need to reverse engineer it.  As we will see there is an interesting possibility to perhaps do this using the RFI experiment on LES-5 which could lead to a path to determine if the command receiver is still operational.

Despite the lack of organized information Daniel Estévez has decoded the beacon’s telemetry.  After reviewing about an hours worth of telemetry before and after a solar eclipse used to identify LES-5 Daniel noted interesting patterns in the data he was decoding.  These observations make it possible that with some level of understanding about how some of the systems work on LES-5 that we could reverse engineer a means to determine if the command receiver still operates.

The command receiver for LES-5 is shared with the RFI experiment in an interesting way.  In fact, a design flaw within the satellite causes the spacecraft to be unable to receive commands or provide useful RFI data during most of it’s orbit. Understanding the design and the flaws in the system could allow for the determination of the status of the command receiver and determine whether it is still operational.

Two pieces of information are telemetered to Earth from the RFI experiment.  “Average Power” and “Peak to Average Power Ratio”.  Note the use of a crystal marker system.

Page 6, The Results of the LES-5 and LES-6 RFI Experiments

Page 12, The Results of the LES-5 and LES-6 RFI Experiments

As noted above the command receiver and the RFI experiment share the same hardware.  In order to do that they are sequenced to share the ~11 minute ‘scan’ cycle. Note the inclusion of the RFI with internal crystal frequency reference markers every 3rd RFI sweep cycle.

Page 8, The Results of the LES-5 and LES-6 RFI Experiments

With the knowledge of where the frequency markers are and the sequence interval of the RFI system it may be possible, assuming the related hardware is still operating, to find those telemetry frames with this data as they should repeat at a predicable interval. 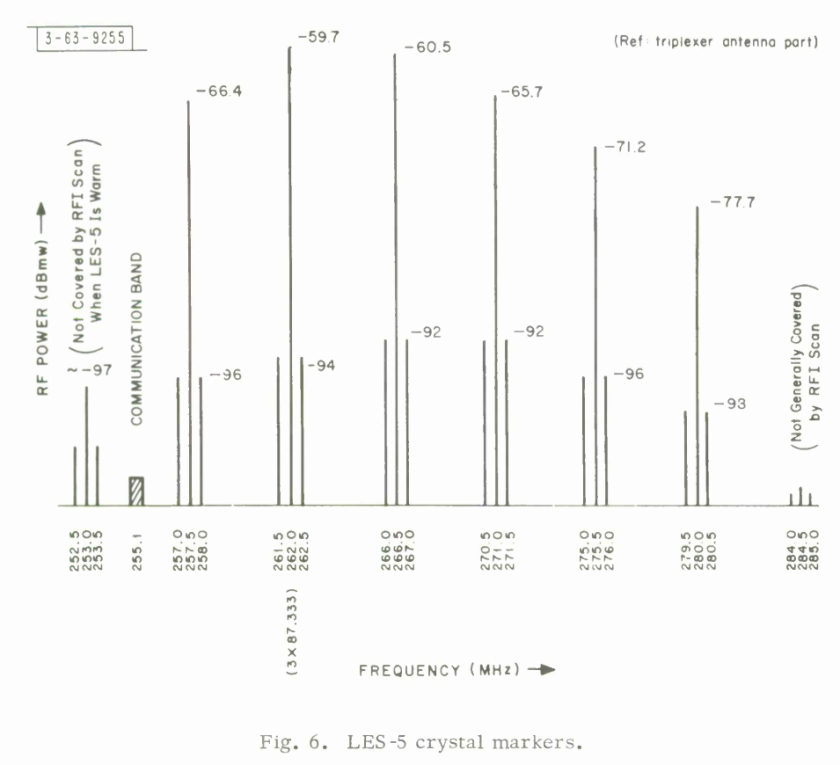 Page 8, The Results of the LES-5 and LES-6 RFI Experiments

Therefore, at least once an hour for ~11 minutes there should be telemetry frames showing the calibration markers that are not visible in the rest of the hours telemetry frames.

Things That Go Bump in the Night…

It turns out there is also a design flaw in the timing system on LES-5 that was not discovered until the spacecraft was in orbit.

This means that during 17 hours of the orbit centred on the Sun and Earth being within the spacecraft sensors range the timing will be corrupted and the data from the RFI experiment will be useless.  But given that the effect is predictable data centred around local midnight will be useful to conduct the tests.

Page 14, The Results of the LES-5 and LES-6 RFI Experiments

Further complicating the situation is a known issue with the receiver for the system suffering a 17dB degradation on a seasonal basis.  This should only affect later testing to see if the receiver is actually working by sensing real world signals.

Assuming the crystal reference oscillator and related downstream hardware are still operational to the telemetry system, then it could be possible to identify the 8 bytes in the telemetry frames that are related to the RFI experiment.  Once identified further tests could be planned to determine if the command receiver is operational.