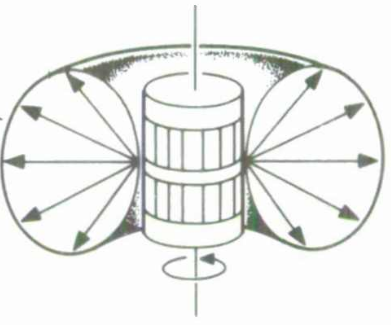 It’s be a quarter of a year since LES-5 was recovered and we began decoding telemetry.  The spacecraft sends 128 words (8 bit bytes) every 10.24 seconds which is called a format.  That format is comprised of four frames of 32 words.  Of the 128 words eight are used for syncing and 24 used for parity checking.  This leaves 96 that contain telemetry data.  Until now we only fully understand eight of the words used for the Radio Frequency Interference (RFI) experiment, leaving 88 words with unknown meaning.  What follows is how we determined the meaning of four more words that reveal the health of LES-5’s solar power system and the present rotational period of the spacecraft.

Since recovery in late March 2020, we have documented nine passes.  Of these eight passes have been recorded with timestamps on each telemetry word recorded, thus allowing us to study the data in detail.  You can review this data on my Github page.

In the animated GIF above one can see all of the telemetry received by my station since LES-5 was recovered and we began timestamping the data.  Distinct patterns in the words being sent can be seen in this animation.  Colour is used to identify what we know of the telemetry’s meaning as follows:

After studying the eight passes of data one can start to see patterns in how the data words behave over a relatively long period of time and we can therefore start to classify this behaviour by what we are seeing.  The figure below shows the breakdown based on a review of the eight passes studied.

As you can see there are a great number of telemetry words that remain fixed either at 0, a fixed none 0 value or at 255, a total of 48.  Interestingly there are also 31 words that exhibit dynamic periodic behaviour.  Three words are fixed during each pass yet vary from pass to pass and six are dynamic during the eclipse season yet fixed during the rest of the observations.

Much like Taylor Bates discovery of the RFI experiment’s data where we used the historical papers found on the web about the research done with LES-5 we have some basic information about the power system on LES-5 that gives us hints of what to look for and expect when reviewing enough data over time to make some sense out of it.

In the paper, LINCOLN EXPERIMENTAL SATELLITE-5 (LES-5) TRANSPONDER PERFORMANCE IN ORBIT the author provides details of how the solar power system operates on page 43.  LES-5 has four DC-to-DC power converters connected to the solar cells arranged around the spacecraft.

The paper also provides details of a failure on LES-5 where one of the solar arrays malfunctioned and displayed a dead spot in the output voltage of converter #4.  Details of this failure and the resulting analysis are found on page 56. 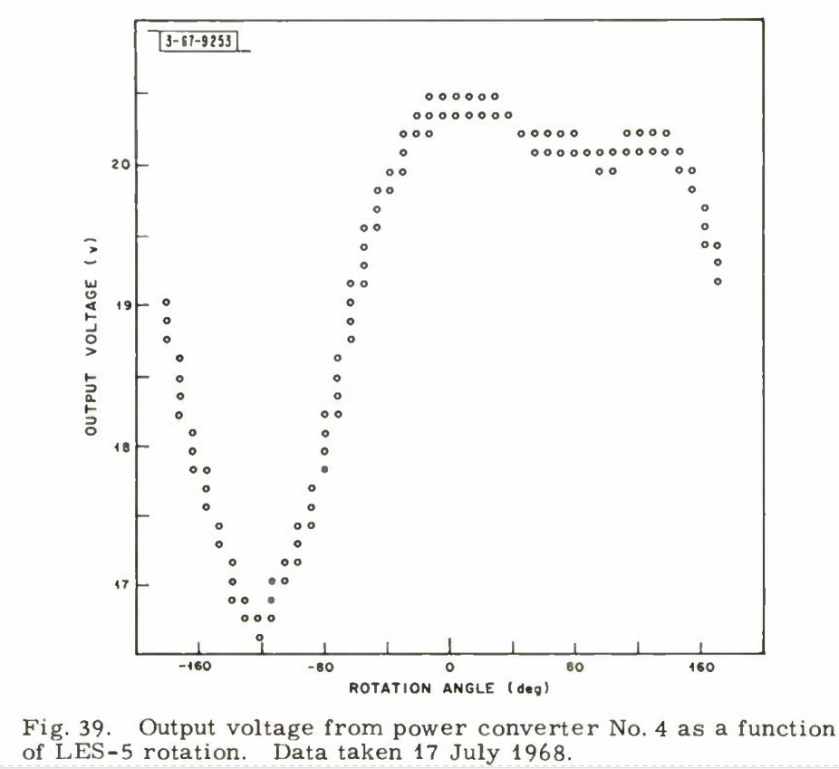 The most interesting aspect about the failure description is the author’s comment about using the technique of de-aliasing the data and the relationship between the telemetry sample rate and the rotation of LES-5.

Given this knowledge we can understand the aliased period of the data in the four power converter telemetry words if we can find the words.  Thus we have what we need to know to go looking through the data to find four channels exhibiting an aliased period related to the sample rate of the telemetry and the rotation rate of the LES-5.  We are searching for four words that have periodic behaviour that are related to the rotation rate of LES-5 and even evidence of the failure mode observed in 1968.

And then there were Four Words…

In studying the months worth of data, four words where noted to be behaving in a consistent manner with respect to each other.

The figures above show four telemetry words behaving in a similar manner over months of data collection.  No other words in the data correlate to what we are expecting to find given the description in the transponder performance paper referenced above.

I zoomed into the data in the above noted words and found an interesting correlation in the period of the data of the four words.

As you can see in the above these four words have data with a period of ~164 seconds.  Two of the words have data that goes to zero periodically and the other two are fairly stable around a fixed value.  Here’s a Jupyter-Notebook that will allow you to explore the four DC-to-DC converter words.

So how does 164 seconds related to the known rotational period of the LES-5 of ~5.3 seconds?  As noted above this period we are seeing in the telemetered data is aliased based on the sample rate and rotation rate of the spacecraft.  With the help of Daniel Estévez, I was able to make sense out of the data and see that the period of 164 seconds is related to the rotational rate of LES-5.

The telemetry Sample Rate (SR) is 10.24 seconds.  We know this precisely as our decoder relies on this to decode the telemetry.

Using historical data we can write,

One can also say that the following is true,

We can also say that if the satellite is rotating the other way the rotations per sample are as follows,

Therefore, we can solve for the present Rotation Rate (RR) of LES-5 by writing,

I feel that given the following observations we have a compelling case to say that these four telemetry words are indeed the solar voltage converter telemetry channels and that the power system on LES-5 maybe in decent health:

I’m fairly confident we now understand four more telemetry channels on LES-5.  These four words are very significant in the understanding of LES-5’s health.  It seems to me that given what we are seeing from the RFI experiment that uses the command receiver and these words about the spacecraft’s power system health there is possibility that LES-5 may be able to be commanded to return to transponder operation.

Soberingly we still have 84 words to understand!