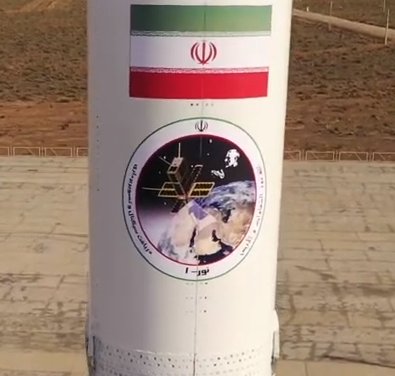 Iran’s new military satellite, NOUR 01, most interesting fact may not be that it resembles a college engineering experiment but rather that it may have a connection to a Mexican military payload launched quietly from New Zealand last year.

It’s also with great pleasure that I can share Scott Chapman, K4KDR’s story of how he found Iran’s NOUR 01 [45529, 2020-024A] radio emissions and confirmed it was alive and well in orbit and noted a twist to the story in a brief interview we had.

On April 21, 2020, Iran’s Islamic Revolutionary Guard Corps (IRGC) launched a rocket from a new launch site near Shahroud.  This sounded initially ominous as the IRGC is a declared terrorist organization in many western countries [ED: IRGC is in fact only a designated terrorist organization in the USA, Saudi Arabia and Bahrain] and this mission successfully entered orbit.  However, within a few days amateur observing efforts and a statement from the top US Space Force general made it clear NOUR 01 was far from something to worry about.  Rather it raises questions that given the present state of import restrictions to Iran how did a western educational satellite bus possibly end up in Iran?

Jonathan McDowell a respected space activity observer reported shortly after launch of his analysis of a decal on the side of the QASED rocket booster that clearly showed a 6U cubesat with antennas for VHF and perhaps UHF.

On April 24th, 2020, Scott Chapman, K4KDR reported on Twitter that he had detected an object emitting 9600 baud FSK packet radio signals from an object that appeared to match the orbit of NOUR 01.  Interestingly, Scott noted that the satellite was easily decoded using amateur protocols (more on that shortly).

From there a number of reports came in from around the world indicating the signal was apparently consistent during the entire orbit of the satellite.  An Italian observer was able to note the satellite entering a rapid data transmission mode while it was over Iran.  All completely normal activities for a satellite…  Nothing to see here, move along…

Then the commander of the US Space Force, general Jay Raymond tweeted that NOUR 01 was a 3U cubesat not the 6U as noted on the decal on the side of the booster.

Up until this point amateurs had developed a very strong case that the emission of 401.5MHz was in fact NOUR 01.  Some single pass Doppler analysis and timing where used.  I then performed a day long data collection run and combined Scott Chapman’s data with mine and concluded beyond a doubt that NOUR 01 is the source of the signals using Dr. Cees Bassa’s ‘Sat Tools RF’.

Finally the first known attempt to visually see NOUR 01 came up negative.  NOUR 01 was too dim to detect for experienced observer Marco Langbroek in the Netherlands.  This implies that the satellite is very small and provides some limited support that the satellite is not the 6U cubesat imaged on the rocket’s decal. 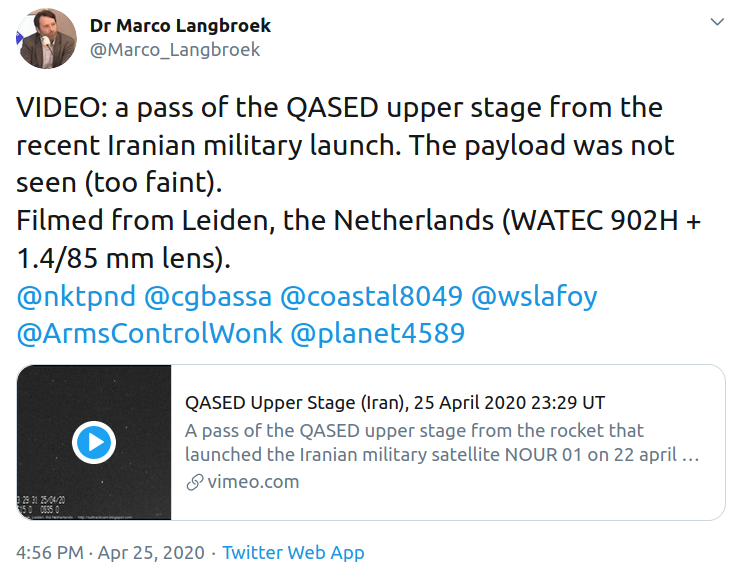 Based on all the emerging evidence Iran’s first stated military mission doesn’t appear to be too terrifying and perhaps there was even a little false advertising.  But the most interesting observation was revealed in a subtle twist in how the satellite referred to itself.

“From Space to Earth…”

During Scott Chapman’s initial observation and subsequent observations of decoded data from the NOUR 01 downlink he noted what he thought could be a generic configuration in the data that was being sent.

The packets all began with the specific format to identify the call-signs respectively ‘SPACE’ and ‘EARTH’ as can be noted in the image below.  In amateur radio, a station calls another station in the same order.  So NOUR 01 is call-sign SPACE and is calling call-sign EARTH.  These are part of the stations AX 25 UI Frame.  In the AX 25 protocol a to and from call-sign is required and is often set to some default value in a new radio modem.

Well it turns out this same call sign sequence has been seen before on a relatively recent military launch by Mexico’s Secretaría de la Defensa Nacional (SEDENA) on a Rocket Labs Electron from New Zealand called PAINANI 1 [44365, 2019-037A] on June 29, 2019.

Painani 1 used an identical source and destination addresses (call-signs) in the configuration of its communication system.  Perhaps implying this was a default or original setting that wasn’t changed by the satellite operators.

The byte sequence below is from Painani 1 with the shared sequence highlighted:

Digging into the Painani 1’s limited references on the Internet gives some clues as to were the hardware came from, a company called CubeSat Kit

A quick browse of CubeSat Kit’s website reveals they sell a 3U cubesat kit.

So we could be left to draw some interesting yet plausibly deniable inferences from this.

Why is their cubesat configured very similar to a recently launched Mexican military cubesat of similar configuration and size?

If Iran has acquired a 3U cubesat from a Californian cubesat kit vendor how did they get it given ITR regulations?

Could this mean that perhaps a flight spare somehow got lost and found it’s way to Iran?

I asked Scott Chapman a few questions about how he recovered NOUR 01 and thought the amateur tracking community could benefit from the discussion.

Scott Tilley – “What made you consider searching the 400MHz band for NOUR 01? What was your inspiration?”

Scott Chapman – “After TLEs were published for two objects from this launch, of course the immediate thought was “can we receive a downlink?” But where to look? For some reason, the thought came to mind, “What if they follow the rules & use an approved frequency”? So I did a Google Search for the phrase “Iran Satellite Frequencies” which led to the following colorful chart“

Scott Chapman – ” … the legend had a designation for “Downlink” “ 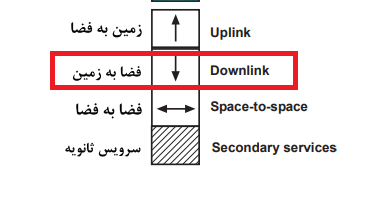 Scott Chapman – “… so I scanned the frequency chart for frequency blocks with that designation. Ruling out parts of the spectrum that I am not equipped to receive, the most likely spot was small patch at the bottom of the 400 MHz band. When the first orbit came over the Eastern U.S. in the late-night hours of 23-April, imagine my surprise to see strong signals on a 10-second interval! However, when the familiar-looking packets decoded as standard 9600 baud FSK packets, doubt crept in and I had second thoughts about this being a military satellite. I kept silent and set an alarm for the early morning hours of 24-April when there would be a MUCH higher elevation pass. Everything went as planned and I had the good fortune of capturing many more packets – again on a 10-second interval and decoding as standard 9600 FSK. Strangely, the source/destination addresses on each packet were “from SPACE to EARTH”, which has been seen on other educational cubesats. After plotting the doppler track in the STRF application and finding a significant match to Object # 45529 (ID’d in the TLE listing as “NOOR”, i.e., “NOUR 01”), I posted a tweet with my findings with the hope that others would monitor the frequency and either confirm my finding or report on a more likely source.”

Scott Tilley – “What is your antenna and related RF path?”

Scott Chapman – “These signals were received with an AZ/EL controlled Wimo X-Quad, 70-cm version, with an SP-70 LNA, LMR-400, to an Airspy R2 & recorded using GQRX”

Scott Tilley – “When you decoded the telemetry why did you feel it was just a standard radio engine on the satellite? Can you provide some context about your experiences with decoding telemetry from satellites?”

Scott Chapman – “Because of the willingness of the Amateur Satellite community to share knowledge & how-to information, I have greatly enjoyed learning how to receive & decode satellite telemetry for a few years now. There is an incredible pool of knowledge in this community, so there is no limit to how far you can develop whatever aspect of the hobby interests you the most. Consequently, I have been able to learn how to track & decode a wide variety of objects in orbit that use many of the various modulation techniques. So, having seen the general appearance of 9600 baud FSK packets from so many other cubesats, it wasn’t a far reach to try to decode these signals with software tools that I already had installed.”

Scott Tilley – “Based on your experience as a VERY active radio satellite tracker what is your opinion of the NOUR 01 satellite’s capabilities based on your own observations and that of others that have shared observations?”

Scott Chapman – “We can only speculate at this point. Small satellites typically downlink telemetry that includes spacecraft health parameters such as battery voltage, solar panel current, the temperature of various components, etc. Many now include a camera, so it’s not uncommon to see the periodic telemetry packets replaced by a steady stream of data that can be decoded as a picture. It’s significant that Amateurs in Europe & elsewhere have in fact seen the 10-second packets from NOUR 01 replaced with a more intense stream of data when in-range of the Middle East, but the one sample of those decodes that I have seen did not include the standard JPG image file format that is common on today’s cubesats. So, for the moment the actual meaning of all the various downlink packets from NOUR 01 remains a mystery.”

Scott Tilley – “Tell me more about your interest into amateur satellite communications and tracking. How did you get into this and why do you find it so fun?”

Scott Chapman – “I knew zero about any of this but the low cost of the basic RTL-SDRs was too tempting to resist. Like so many others, I learned from what I came to find out was an amazing community of incredibly knowledgeable people who enjoy the various aspects of satellites and spacecraft in general. I learned how to decode NOAA Weather satellite APT downlinks, later discovered that there was a packet digipeater on the ISS, and it took off from there. I sincerely hope that people like Jan (PE0SAT), Mike (DK3WN), Dani (EA4GPZ) and many others don’t still have any of the early questions I emailed them out of the blue because they would be as embarrassing as 8th grade class pictures! But I am so grateful to those gentlemen and so many others for sharing what they knew about this hobby to the benefit of all of us.”

NOUR 01’s recovery was a absolute pleasure to watch unfold.  The amateur satellite tracking community rallied and using creativity, limited gear and some elbow grease peeled back the layers of yet another potential mystery in orbit and gave the world perspective on this news.  For those that sit on the sidelines watching a few of us have all the fun, I invite you to get involved and join us in looking up and reporting what you see for the benefit of us all.

Congratulations Scott on trusting your instincts and grabbing your prize!